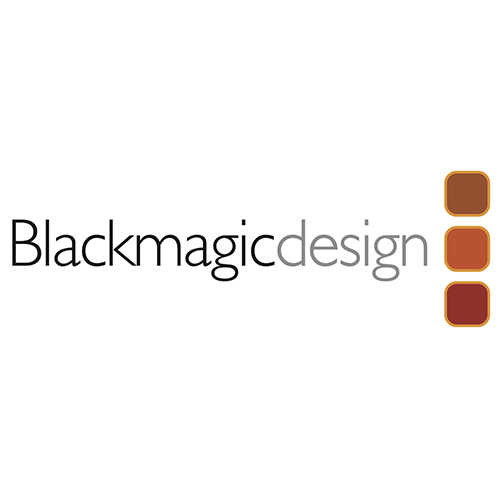 4 Other customers have inquired about this product

The DaVinci Resolve 17 Studio & Speed Editor Bundle from Blackmagic Design pairs a download of the versatile Resolve 17 editing software with the compact Speed Editor keyboard interface. This combo provides a host of editing, color correction, VF/X, motion graphics, and audio tools along with a wireless Bluetooth and Mac/Windows compatible console designed to speed your editing process.

Please note, the activation card does allow you to use two computers at the same time; however, the activation code in this bundle cannot be downloaded, you must wait for delivery of the physical card. This is to protect the security of your software.

Blackmagic Design DaVinci Resolve 17 Studio is a major release with over 100 new features and 200+ improvements. The Color page features new HDR grading tools, AI-based magic mask for targeted grading, and a color warper. Fairlight provides a faster workflow with updated mouse and keyboard edit selection tools. Fairlight also has a next-generation audio engine and busing architecture with support for editing 2000 tracks in real time. The Cut tab offers Smart Reframe for social media among other new capabilities. The Edit page has many improvements to workflow and now allows independent proxy media that can be generated internally or externally by third-party tools. Fusion provides new features such as custom vector shapes. Also, compositions created in Fusion can now be used as an effect, title, or transition in the Cut and Edit tabs.

DaVinci Resolve offers a comprehensive editing experience by combining different editors in one platform, across different tabs at the bottom of the interface. Between these different tabs, you get full-featured advanced solutions for video editing, color correction, visual effects, motion graphics, and audio post-production. DaVinci Resolve is also built to work fast and efficiently and to handle large projects with collaboration. You can work with up to 8K footage and a wide variety of formats. Toolsets are available for advanced HDR editing, 3D stereoscopic workflows, social media content, and much more.

Your order provides you with an activation card by mail. The card has a code for downloading and running the software on up to two computers.

Fast editing with mouse and keyboard

Support for extra-large projects with thousands of tracks

Build your own effects with customizable templates

New and improved Resolve FX features, such as texture pop and detail recover

The Blackmagic Design DaVinci Resolve Speed Editor is a perfect complement for the editor on the go. It interfaces with macOS or Windows editing systems running DaVinci Resolve, providing you with keyboard shortcuts and controls that speed up your editing, compared to using a mouse to navigate your edit system. The Speed Editor is small enough to take with you on location, and its built-in battery allows you to use it via Bluetooth for a wire-free connection. The Speed Editor is charged by and can connect to your computer via an optional USB Type-C cable.

The Speed Editor features dedicated push buttons that control the edit modes, timeline navigation, and effects of DaVinci Resolve. Additionally, these push buttons provide shortcuts to useful features available only on the Speed Editor. The built-in Search Dial is similar to the jog wheel often found on professional edit decks, but in conjunction with the push-button keys and DaVinci Resolve software, the search dial is much more powerful.

Although the Speed Editor's panel is small and lacks a Qwerty keyboard, it is loaded with dedicated push buttons for quickly accessing features and navigating your timeline.

Select from Cut, Dissolve, and Smooth Cut for transitions between clips.

Provides keyboard shortcuts that replace dragging clips from the trim windows to the timeline or switching to different modes in the Resolve to make edits via the mouse:

Smart Insert: Resolve will locate the nearest edit in the timeline and insert the clip in that location.

Append to End: Adds the clip to the end of your timeline edit with the in and out points you've selected.

Close-Up: Automatically creates a slightly zoomed-in version of the selected shot and places it on the top of the timeline. 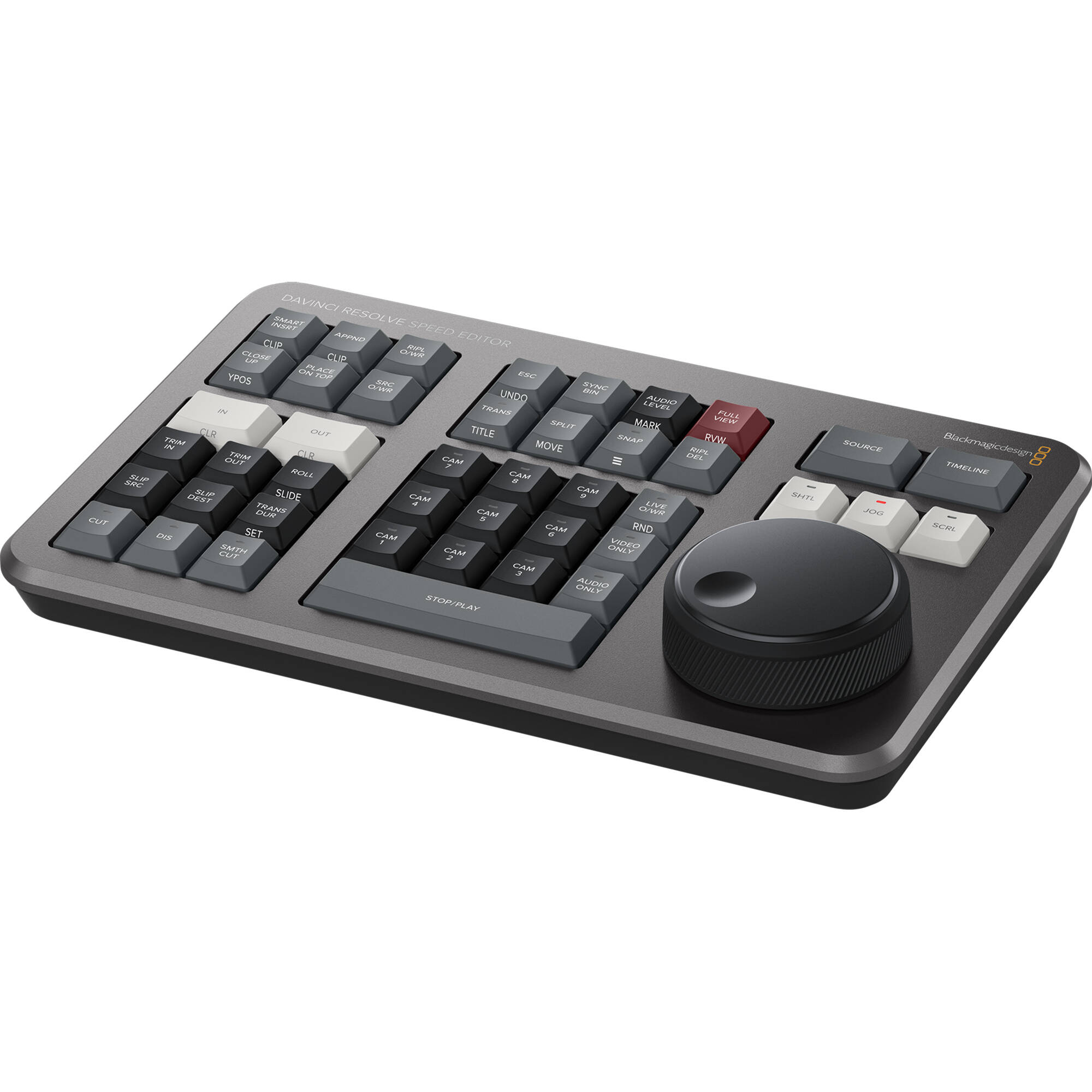 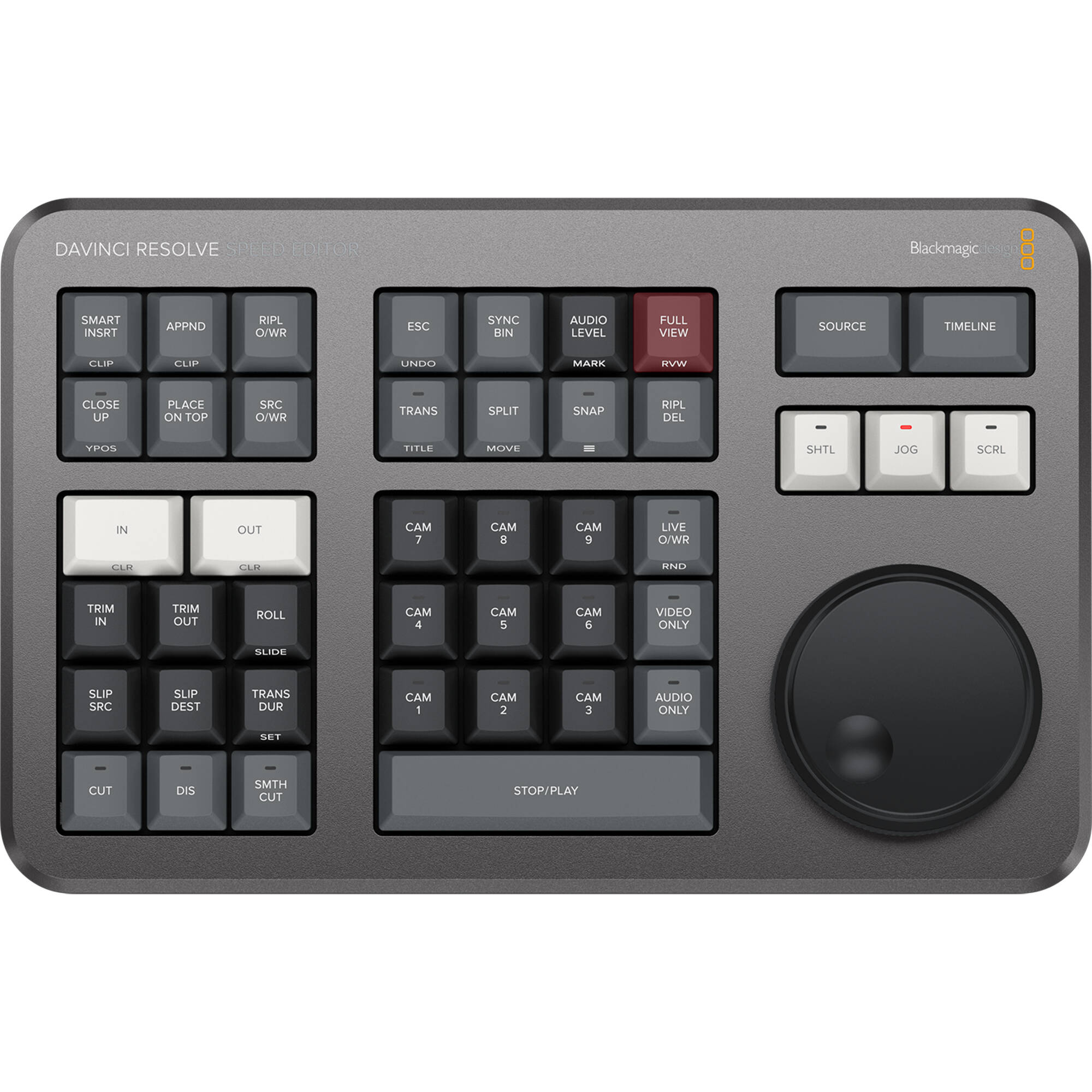